The Cricket Development Trust Scotland in partnership with The Stanley Morrison Charitable Trust is delighted to have supported the initial phase of Cricket Scotland's new 'striking and fielding' programme being rolled out to primary schools across Ayrshire.

The programme which meets the Scottish primary schools Curriculum for Excellence outcomes has been designed to be fun and engaging with great impact for both children and teachers.

The Stanley Morrison Charitable Trust have generously funded the programme which means that 12 primary schools will each receive a set of the multi use Cricket Factory equipment .The flexible equipment which also has great visual impact will assist specially trained teachers and PE staff to deliver the exciting new programme.

Tim Morrison,Chairman of The Stanley Morrison Trust said '' The Stanley Morrison Trust, whose prime objective is the development of Youth in Sport, is delighted to be involved in an initiative which will introduce more children to Cricket in Ayrshire. To succeed with a programme like this needs dedicated and enthusiastic regional development managers, without their support, opportunities like this would struggle to succeed, however the knowledge, skill and determination of the managers that we have met, have convinced the Trust that this is an exciting and purposeful involvement ".

Keith Oliver, one of Cricket Development Trust Scotland's Trustees commented  " It's fantastic when a chance conversation with one of the Trustees of the Stanley Morrison Trust has resulted in children from throughout Ayrshire benefiting from this initiative." 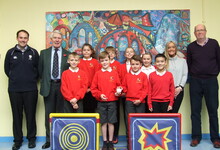